Our boys and young men are faced with many challenges today as it relates to how we define what it means to be a man.  While there are wonderful things about being a man, far too many of the characteristics hold our boys hostage while negatively impacting their ability to develop into healthy and respectful men.  Far too many definitions of manhood tell our boys to deny feelings of pain and hurt, that anger is the only emotion they have permission to express.  Notions of manhood that teach a lack of interest in the experience of young women and girls outside of sexual conquest, and that asking for help as a man  is a sign of weakness.  Our boys are challenged to not be soft, don’t be a punk, a sucker, too nice, too friendly, too gentle, too kind or loving.  These are all the ingredients found in what we call the man box.

I remember asking a twelve year old football player how you would feel if your coach told you in front of all the other players that you’re playing like a girl.  When asking the question I thought the boy would say “I would be mad or sad”. But to my surprise his response was “it would destroy me”.  Such a response lends me to think about what it is that we as men are teaching our boys about girls.  As a coach it’s important to think about the ways in which one motivates boys to perform at their best.  Every time a coach tells a boy that he’s playing like a girl, the follow up question should be “what are we then saying about girls?”

The characteristics of what it means to be a man aid in creating what I call the Cycle of Consequences for Boy’s to Men.  We have these rigid definitions of manhood (the man box) creating this cycle for far too many of our boys and young men. (See diagram) 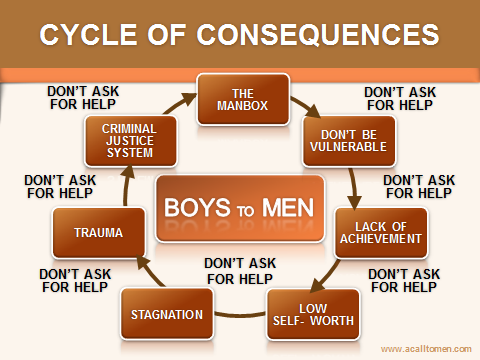 Let’s discuss each of these characteristics.  As mentioned the man box makes up many of the ingredients representing the collective socialization of manhood.  This socialization with all its goodness also teaches some rigid definitions of what it means to be a man. Definitions of manhood including; be tough, strong, athletic, aggressive, no fear, no pain and always in control.  Don’t be; soft, show weakness, too caring, too kind, too loving, too gentle, etc…

While there is not necessarily anything wrong with being tough and strong.  For example I love football, I love watching tough strong men play the game of football.  The question is what if I’m not tough; what if I’m not strong, what if I’m very loving and gentle?  What if I want to be loving, kind and gentle while being tough and strong at the same time? What if I want to speak about my pain, hurts and fears? There is a reason why our boys and young men work so very hard to fit into these rigid definitions of manhood, even if it’s not who they are.   Is this what we truly want for our boys?  Is it working well? Does it contribute too many of our social problems? I believe these are fair question to ask those of us who are men.

The man box produces a desire in men to not be vulnerable.  Being vulnerable means not being in control.  Being vulnerable means not taking risk and most importantly it includes not showing or even owning our feelings as men.  If boys and men can’t express feelings and if asking for help is a sign of weakness, far too often it results in lack of achievement, low self-worth and stagnation.  These results also produce excessive trauma for many boys and men as well as involvement in the criminal justice system.  The unfortunate thing within all this is that our boys and young men then rely on what got them in the challenging situations to get them out of it, the man box.  So this cycle begins for many boys and young men. A cycle of consequences, that without help far too many of them can’t get off.

I believe that coaches, fathers, mentors and men in general have the opportunity to prevent or interrupt this cycle of consequences our boys and young men experience.  I believe that we as men have a responsibility to assist boys and young men in their journey to manhood.  I also believe and know that our boys not only need assistance from men, they also respond well to it.

My organization A CALL TO MEN had the pleasure last year to host with the generous support of the Verizon Foundation three events titled “A CALL TO COACHES Developing Young Men of Character-Your Voice Counts”  The events took place in Charlotte, NC, Baltimore, MD and Seattle, WA. We had a wonderful turn out of men at each event.  The events included coaches from all sports, recreation to college.  Concerned men from all walks of life attended; fathers, mentors, faith leaders and many more.

We had enormous participation from current and former NFL players.  The list of presenters included current players Chris Canty, Russell Okung and William Gay. Former players included; Head Coach Ron Rivera, Mark Carrier, Jon Kitna, Joe Erhmann and Gordon Banks.  Many men associated with the game also joined in the effort; Dave Gettleman General Manager of the Panthers, James Brown, Sportscaster, Brandon Beane Director of Football Operations Panthers, Rod Hairston Chaplain for the Ravens, Casey Kimbrough Chaplain for the Panthers and Willis Whalen of the NFLPA.  All of these men spoke of the importance and the difference we as men can make in the lives of boys and young men.  Many of the men shared personal experiences with coaches and other men and the impact they had on their lives.  It was obvious that the hundreds of participants at each event were moved by these experiences and hopefully transformed in their personal beliefs regarding the responsibility we as men have in the development of your men of character.

As men we have a responsibility to be interrupters and preventers of this cycle of consequences in the lives of boys and young men.  It’s our responsibility to steer them in the right direction.  As men we have a responsibility to create an environment where boys and young men feel comfortable sharing their feelings, expressing their fears, and most importantly asking for help.  Such an environment will also require men to model what they teach, allowing themselves to be vulnerable, sharing openly and demonstrating love and compassion.

Envision a football coach at the end of a practice surrounded by forty boys all on one knee looking up at him.  An NFL player at his football camp with two hundred boys in attendance.    At that time he has their undivided attention. At that moment he’s more important than their mother, father and possibly anyone else in the world. It lends me to think, at that moment what a wonderful time to talk with them about something other than football. What a wonderful time to have a conversation with our boys and young men about being men of integrity, substance and character.

Tony is an educator, activist and lecturer who has been working in the social justice arena for over twenty years. He is both nationally and internationally recognized for his effort to end men’s violence against women and promote healthy and respectful manhood. Tony is the co-founder and co-director of A CALL TO MEN: The Next Generation of Manhood. He is the author of “Well Meaning Men… Breaking Out of the Man Box – Ending Violence Against women” and visionary for the book, “NFL Dads: dedicated to Daughters”.

Tony’s message is welcome and supported by many grassroots and established organizations. He’s currently working with numerous domestic and sexual violence programs, the National Football League, colleges and universities around the country. He has worked with the United States Military Academy at West Point and the United States Naval Academy at Annapolis and the National basketball Association.

Tony is an international lecturer for the U.S. State Department having worked in the Democratic Republic of the Congo. He is working extensively with the United Kingdom providing training and leadership to A CALL TO MEN – UK. In addition, he has been a guest presenter to the United Nations Commission on the Status of Women and a script consultant for “Law & Order: Special victims unit”.  He can be reached at acalltomen.org