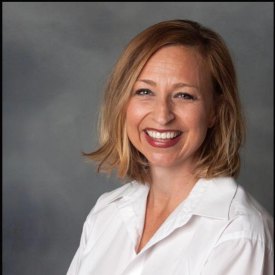 Kylla Lanier is the deputy director and co-founder of Truckers Against Trafficking, a 501(c)3 organization that exists to educate, equip, empower and mobilize members of the trucking and travel plaza industry to combat domestic sex trafficking. She speaks around the country about TAT’s mission and how the trucking industry is combatting human trafficking. Ms. Lanier also handles social media for TAT including managing the Facebook, Twitter, Pinterest, Instagram and YouTube accounts. She’s been involved in the fight against human trafficking since 2007 when she helped initiate the state coalition against trafficking in Oklahoma.

In the Fight Against Human Trafficking, Why Truckers?

When working on a strategy to fight human trafficking, one of the first steps should be to determine which groups of people have the greatest opportunity to spot human trafficking as it is happening. In other words, who could serve as the primary surveillance? 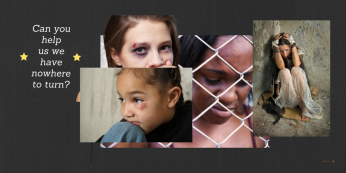 When it comes to this crime, those front-line people include such groups as medical personnel, who treat victims in medical clinics; service personnel in local neighborhoods (such as postal workers, and cable, electrical, and water providers), who come by homes on a regular basis and would notice if something unusual was going on; restaurant and hotel personnel, who might see trafficking taking place in their establishments; and members of all segments of the transportation industry, including airport employees, because traffickers are continually transporting victims to sell them in a variety of places.

Truckers Against Trafficking (TAT) began as an initiative of Chapter 61 Ministries in 2009 to work with the trucking industry, because it’s 7-million strong. Truckers are trained to be extremely observant. The trucking industry is composed of people already entrusted with caring for other people’s goods, which speaks to the character of the industry when it comes to caring for others—especially when the interest of others might be in trouble. Members of the trucking industry are everywhere, covering the entire United States. Lastly, traffickers wanting to make fast money often target truckers at truck stops and rest areas (because they’re everywhere and easy to reach right along highways) to sell their victims. This is evidenced by the number of victims rescued from truck stops by the FBI.

The members of Chapter 61 Ministries believed that if the trucking industry were empowered with education and equipped with tools to fight human trafficking, they would be quick to mobilize against this crime. They could do their part to see victims recovered and perpetrators arrested. Members of the trucking industry could be everyday heroes in the course of their jobs and make a significant impact against the criminal activity of human trafficking. Perhaps they might even have a greater impact than the average person, because of their mobility and training. They were a critical front-line group to recruit.

Using tools such as an informational website (www.TruckersAgainstTrafficking.org), on- 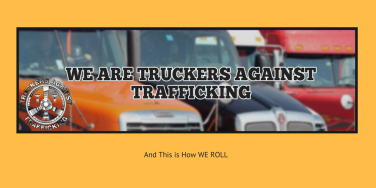 demand webinars, a trucking-industry-specific training DVD, wallet cards with signs to look for and questions to ask, and social media accounts (Facebook and Twitter), TAT began making contacts throughout the trucking industry to build relationships and state the case for trucking members to join the abolitionist movement. TAT also began having a presence at major trucking shows as well as providing free presentations wherever requested by members of the trucking industry. The trucking industry began responding positively. By 2011, TAT had grown so much and was making such an impact in the industry that it needed to become an independent 501(c)3 non-profit organization in order to sustain its efforts.

Members of the trucking industry, who had witnessed the prostitution of women and minors at various places throughout the United States for years but who had not known what it was – forced prostitution and modern-day slavery – began calling the National Human Trafficking Resource Center (NHTRC) to report what they were seeing. Polaris Project, which runs the hotline, reported that calls from truckers rose substantially starting in 2009 when TAT began. As of March 31, 2016, truckers have made 1371 calls with 425 likely cases of trafficking, involving 744 victims.  Of those 744 victims, at least 249 of them were minors.

TAT works to create relationships between state and federal law enforcement and members of the trucking industry through half-day events called coalition builds. These events provide a more effective localized response to human trafficking by gathering law enforcement agencies (state, federal and local) and local anti-trafficking resources (task forces and local non-governmental organizations) in the same room with key industry stakeholders, including general managers of truck stops and representatives of state trucking associations and carriers. In 2014, TAT launched its Freedom Drivers Project, a 48-foot mobile exhibit that travels the United States, teaching people about domestic sex trafficking and what the trucking industry is doing to combat it.

Using TAT materials, the Motor Vehicle Enforcement division of the Iowa Department of Transportation has created a model for other states to follow in working with the trucking industry. They place TAT materials in their state scale sites, state rest areas, and state truck stops. They are also working with major carriers in the state to train their employees with TAT materials. Ohio has become the first state in the union to incorporate TAT training as part of their CDL licensing, beginning in July 2016.

Why truckers? Watching the TAT training DVD readily answers that question. With one phone call, a trucker who saw some under-aged girls working a truck stop not only facilitated the recovery of those girls, but also that of seven other minors. Thirty-one offenders were arrested and a 13-state child sex trafficking ring was broken.

So how can you help? If you’re a trucking company or a shipper, train your drivers and employees at your company with TAT training materials. We supply all training materials for free. Once you’ve trained your drivers and employees, go on our website and register them as TAT Trained. It takes two minutes or less to do so. If you’re a shipper, talk to trucking companies you’re thinking of hiring about human trafficking and about training their employees. Change your RFPs to include being TAT trained a condition for hiring. When shippers ask us how to know which companies are TAT trained, we point them to our website and the growing list of companies. Continue to talk to everyone in your sphere of influence about human trafficking and what the trucking industry is doing to fight it … your neighbors, church, community, family. You may keep vulnerable children from becoming victims of human trafficking and you may influence others to become involved in the fight.

There are four main reasons why this fight against human trafficking should matter to you:

1. Moral – Freedom is one of the basic values men and women have fought and died to protect for our country. Every person has a moral responsibility to fight this crime, which not only denies freedom to thousands of Americans but exploits, oppresses and abuses those who are often least able to fight for themselves.

2. Opportunity – Members of the trucking industry are often in locations frequented and targeted by traffickers to sell victims. Because they have a greater opportunity to both see and report it, they need to be educated and equipped to do that … victims recovered and perpetrators arrested.

3. Business risks – Inaction when trafficking is seen or suspected can result in substantial risks for companies, as well as drivers and other employees. These include, but aren’t limited to:

4. Financial – Impounded loads cost the company financially, whether from
Loss of customer satisfaction and retention
Loss of revenue because the load isn’t moving or
Potential legal fees for securing the load’s release

Tagged as: And He Restoreth My Soul Project, children, Recovery, Truckers Against Sex Trafficking

2 thoughts on “Truckers Against Sex Trafficking” Leave a comment ›