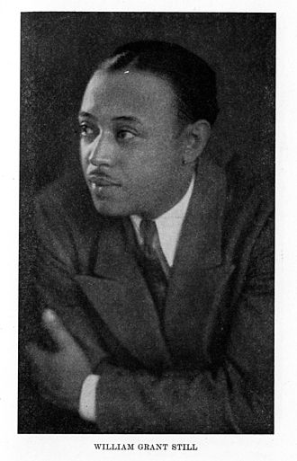 All rights to it are reserved by WGSM Photography by Maud Cuney-Hare, 1874-1936

I was fascinated, humbled, and proud to find William Grant Still amongst the greats that I researched. I think we take to much for granted by not knowing the positive roles and contributions made by the Greats in Black History. Especially, William Grant Still.

At the age of 15, he taught himself to play the clarinet, saxophone, oboe, double bass, cello, and viola.

At the time of his death, he had nearly 200 works, including five symphonies and nine operas to his credit.

William Grant Still a Man of Many Firsts

Willam Grant Still composed Song of a City for the 1939 World’s Fair in New York City. The song played continuously during the fair by the exhibit “Democracity.” According to Still’s granddaughter, he couldn’t attend the fair except on “Negro Day” without police protection.

Still was also hired to arrange the music for the 1943 film Stormy Weather, but left the assignment because “Twentieth-Century Fox’ degraded colored people. https://en.wikipedia.org/wiki/William_Grant_Still

William Grant Still received many awards and citations for his work. In 1961, he received the prize offered by the U. S. Committee for the U. N., the N.F.M.C., and the Aeolian Music Foundation for his orchestral work, The Peaceful Land, cited as the best musical composition honoring the United Nations.

Among other awards and citations to name a few

The information listed above from the following websites.

Any changes made from the original information pulled from websites above were made purely for this article about the works of Dr. William Grant Still. A man who I found to be remarkable and extraordinary.

For other notable black conductors see

Introducing Darlene Janice Harris "I do not want Christ's death to be found vain in me. Therefore, each step I take must count and be purposefully forged for someone's growth toward God's desire and His glory." Experience: Ministry Development, Public Speaking, Workshop Creation.
%d bloggers like this: